The DIL gallery welcomes you to its premises located at 86 rue du Faubourg Saint-Honoré. Come and discover the gallery’s near 30 modern paintings by artists such as Fernand Léger, Bernard Buffet, and Victor Vasarely.
Our team members are extremely knowledgeable regarding these artists and their work, and will be able to answer all your questions about the paintings on display.
In addition, the DIL gallery can give you a free appraisal of your works of art, carried out by experts in modern painting.

The DIL gallery displays the works of several modern art painters who had a great impact on 20th century art history.
Our collection includes in particular a large number of works by two emblematic artists: Bernard Buffet and Fernand Léger.Let's learn more about these two leading figures of modern art. 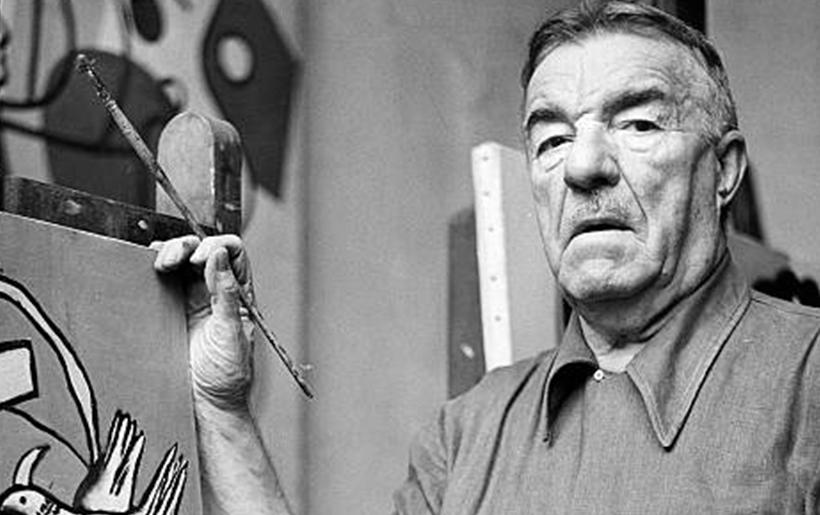 Fernand Léger was born on February 4, 1881 in Argentan (in the Orne region of France) and died on August 17, 1955 in Gif-sur-Yvette (in the Essonne region). He was a French painter who also created cartoons for tapestries and stained-glass windows; he was a decorator, a ceramist, a sculptor, a draughtsman and an illustrator.

He was one of the first to publicly exhibit Cubist-oriented work.

Both his Normand roots, inherited from his farming father, and his outspokenness caused Fernand Léger to be referred to as “the peasant of the avant-garde".

At 19 years old, he discovered 1900 Paris, settled in the Montparnasse district and attended painting academies.

As early as 1903, Léger shared a studio with painter André Mare. In 1907, the retrospective exhibition devoted to Cézanne made a strong impression on him, as it did on many Paris painters, and definitively influenced his painting. The same year, he discovered Picasso’s and Braque's cubism.

Léger soon blended into the effervescence of Parisian artistic life and from 1908, he worked alongside Modigliani, Laurens, and especially Alexander Archipenko. In 1908, he moved into La Ruche (literally “the Beehive”), an artists’ residence in the Montparnasse district, and became friends with Blaise Cendrars, Max Jacob and Guillaume Apollinaire. He also interacted with such painters as Robert Delaunay, Marc Chagall, Chaïm Soutine, Chaim Jacob Lipchitz, Pierre Reverdy and Maurice Raynal.

He painted La Couseuse, in 1910, which marked the beginning of his cubist work. A cluster of geometric lines concentrated into a short space, the canvas is reminiscent of the massive figures Picasso painted that same year. However, with Nu dans la forêt (1909-1910), Léger introduced his own personal style of cubism, even though he certainly drew inspiration from Picasso’s work bearing the same title.

Léger was a keen and regular attendee of Medrano's circus and he painted acrobats, clowns, and jugglers whose "mechanized" bodies have the same value as objects and decorations.

Léger married Jeanne Lohy in 1919. They had met before the war in Parisian intellectual circles; Jeanne became his war godmother and maintained an abundant correspondence with him.

In 1924, his style grew more aligned with the purists and he contributed to the magazine L’Esprit nouveau.He founded the Academy of Modern Art at 86 rue Notre-Dame-des-Champs in Paris with Amédée Ozenfant who would teach there until 1928. It became the Academy of Contemporary Art in 1934.

In October 1940, Léger left Paris for Marseille from where he sailed to the United States. There, he taught at Yale University with Henri Focillon, Darius Milhaud and André Maurois.

Fernand Léger joined the French Communist Party in 1945 and remained a member until the end of his life. In 1946, he reopened his studio on the Place Jules-Ferry in Montrouge.

In the early 1950s, Fernand Léger participated, alongside Jean Bazaine and Jean Le Moal, in the decoration of the Church of the Sacred Heart, built in a working-class district of Audincourt in the Doubs region of France. He designed the seventeen stained-glass windows situated in the nave and the choir, and drew the cartoons for the tapestry located behind the high altar.

In 1952, he married Nadia Khodossievitch.

Fernand Léger’s success after his death

A few months before his death in 1955, Fernand Léger had bought the Mas Saint-André, located at the foot of the village of Biot in the South of France. His widow In here Nadia Légerand his close collaborator Georges Bauquier decided to create a museum on that horticultural land to pay tribute to Fernand and to foster knowledge of his work.

The building integrates a huge mosaic on its façade, initially planned by Léger for the decoration of the Hanover stadium, but never to be completed.

In 1969, the founders donated the building, the land and a rich collection of over 300 works of art to the French State. André Malraux, Minister of State for Cultural Affairs, accepted the donation at an official event which ended with a gala held at the Palais des Festivals in Cannes.
Le musée Léger Léger became a national museum and, according to the terms of the donation, the founders remain directors for life.

Léger lived in Paris and died in Gif-sur-Yvette in the Essonne region of France, yet he was born and raised in Argentan in Normandy, and he never severed his ties with his birthplace, as his paintings bear witness to.

In 1922, his mother bequeathed to him this farm in Lisores, where he would go and recharge his batteries every chance he got for over 30 years. He had an art studio there. In the 1970s, his wife Nadia Léger opened the house to the public. 40 years later, the art dealer Jean du Chatenet reactivated the project.

The beneficiaries and holders of the moral rights of Fernand Léger, who are descendants of Nadia Léger and who chair the Comité Léger, inform professionals and amateurs of the art world that, to date, no authorization has been given to a third party for the publication of a “catalogue raisonné” of works on paper by Fernand Léger.

Should you wish to have something appraised, simply send your enquiry to contact@comiteleger.fr

Bernard Buffet was born on July 10, 1928 in the 9th arrondissement of Paris.

He was raised in the 17th arrondissement at 29 rue des Batignolles where he began to paint and draw at the early age of ten. From a very young age, he spent time with the artist Marie-Thérèse Auffray who taught him to paint and became his mentor. He was expelled from the Lycée Carnot in 1939. In 1942, he attended evening classes organised by the city of Paris in the Place des Vosges where Paul Darbefeuille introduced him to drawing.

His first steps in painting

Bernard Buffet successfully passed the entrance exam to the National School of Fine Arts in December 1943 at the age of 15. He then spent two years in the studio of painter Eugène Narbonne, where he was already considered to be very talented. He left to work on his own as early as 1945 in the maid's room of his family’s apartment. During a vacation in Saint-Cast-le-Guildo in Brittany, he began to paint beach scenes. In 1946, he exhibited his first painting, a self-portrait, at the Under 30s Salon at the Galerie des Beaux-Arts.

He then exhibits L’Homme accoudé at the “Salon des Indépendants” in 1947. In December, his first private exhibition takes place, presented by Pierre Descarques at the Librairie des impressions d'art, organized by Guy Weelen and Michel Brient. The French State, through Raymond Cogniat, is the first to purchase one of his paintings for the National Museum of Modern Art in Paris: Nature morte au poulet..

In April 1948, Buffet submits a new painting, Le Buveur assis, , as an entry at the Young Painters’ Prize organized at the Drouant-David gallery, 52 rue du Faubourg Saint-Honoré in Paris. He did not win the prize, but Doctor Maurice Girardin, a contemporary art collector who acquired 17 of Buffet’s works between 1948 and 1953, defended his painting with passion and drew Emmanuel David's attention to the young artist.

A few days later, Emmanuel David went to the apartment at 29 rue des Batignolles and offered Bernard Buffet to enter his gallery with an exclusive contract. The contract was later shared with Maurice Garnier.

The following June, at the Saint-Placido gallery in Paris, Buffet shared the Critics' Prize with Bernard Lorjou, who was twenty years older than him.

1958 sees the first retrospective of his work at the Charpentier gallery in Paris. Pierre Bergé publishes Bernard Bernard Buffet. In May of the same year, Buffet meets Annabel Schwob in Saint-Tropez: it's love at first sight. She was in several simultaneous relationships at the time, and Buffet had just left Pierre Bergé whom he had been living with for several years and who was managing his career.

On 12th December,1958, Buffet marries Schwob in Ramatuelle in the South of France. He was to paint her tirelessly; in 1961, the name of one of his exhibitions was "Thirty Times Annabel Schwob".

In 1961, he created a set of paintings depicting the life of Christ to decorate the chapel of Château l'Arc, in the town of Fuveau. Ten years later, at the request of Monsignor Pasquale Macchi, secretary to Pope Paul VI, Buffet gifted these paintings to the Vatican Museum where they are exhibited in a dedicated room.

Maurice Druon published Bernard Buffet in 1964, with captions by Annabel Buffet and images by Luc Fournol. Bernard Buffet bought La Vallée in Saint-Cast where he would work until 1970.

The 25th of November 1973 saw the inauguration of the Bernard Buffet Museumin Surugadaira, Japan, created by Kiichiro Okan.

Elected to the Academy des Beaux-Arts on March 13, 1974 in the chair of Paul Jouve, Bernard Buffet was then the youngest academician.

Severely weakened by Parkinson's disease, Buffet committed suicide by asphyxiation on October 4, 1999 in his studio in the La Baume estate near Tourtour in the Var region of France. He was found suffocated in a black plastic bag on which his name was printed in his distinctive calligraphy.

In November 2007, the third volume of Yann Le Pichon's Bernard Buffetmonograph was published, covering the years between 1982 and 1999.

Whether paintings, watercolours or drawings, send us a description and a double-sided photo of the works of art you have, and we will give you a free appraisal. 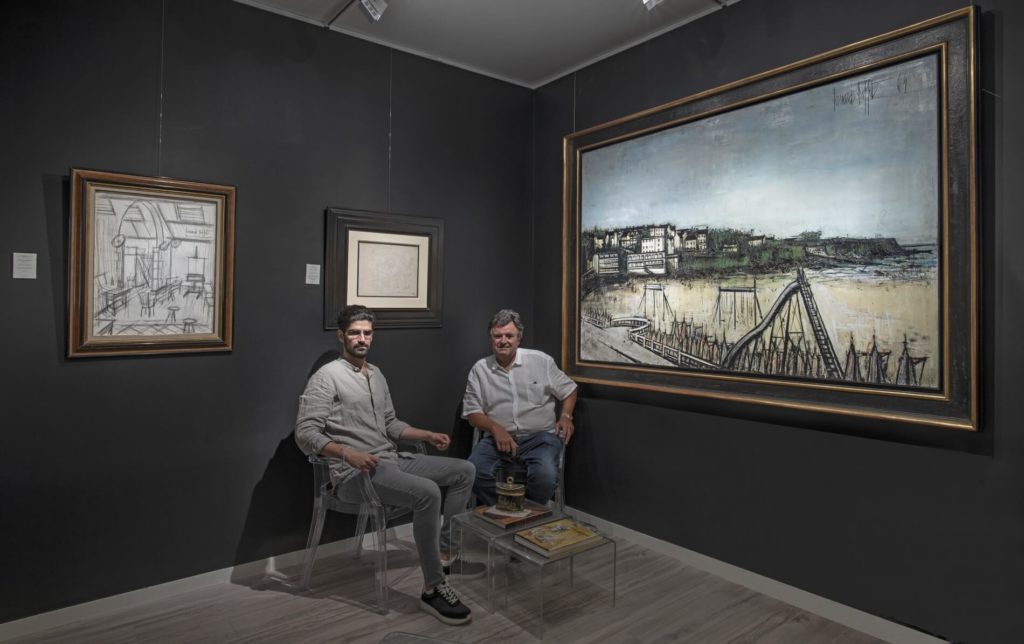 HOW TO FIND US

HOW TO FIND US